Battle of the nation brands

The Scottish electorate voted on the question ‘Should Scotland be an independent country?’ on Thursday 18th September 2015. The UK Government stated that if a simple majority of the votes cast were in favour of independence, then “Scotland would become an independent country after a process of negotiations”. If the majority voted against independence, then Scotland would continue within the United Kingdom (1).  In addition, further powers would be devolved to the Scottish Parliament as a result of the Scotland Act 2012. This article looks at some of the drivers and barriers from a political branding and also marketing perspective. 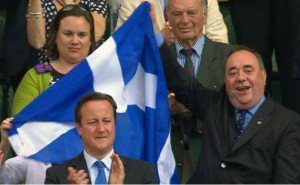 What are drivers and barriers to Scottish Independence?

Scottish residents over the age of 16 are eligible to vote. According to the National Records for Scotland 4.1m people aged 16+ registered to vote (2). Though of nearly half a million EU citizens living in Scotland just 94k registered. 16-17 year olds also voted for the first time. This is the result of a political bargain or trade which suggests different benefits to the different political sides.

Influencing starts with awareness of an issue or opportunity. Appreciating or rejecting an idea, engaging (and potentially interacting with other influences or influencers) then follows to reinforce or change voting intention and behaviour. Research in political science has traditionally ignored non-rational considerations in theories of mass political behaviour though a growing literature suggests that affective states (i.e. emotions or feelings in contrast to cognition) are both beneficial and biasing (3). In addition other research (4) found that anxiety and enthusiasm encourage more evaluation and consideration of political choices. Also that events such as the outcome of football matches (5) and the weather (6) can stir emotions and affect voting decisions. 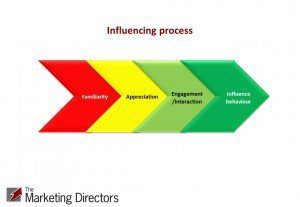 How does the electorate perceive the question?

The ‘Yes’ camp frame the question as Scotland vs. Westminster and paint Westminster, and the likes of David Cameron, as the enemy. Meanwhile, the ‘Better Together’ team argue that the question is not about choosing between two states but about choosing between one or both. Though through the electorate’s eyes the spectrum of options from Scotland the brand to both Scottish and British brands is probably greater. Where perceptions lie is key to electoral success. 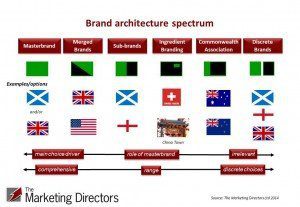 Some of the Scottish and Great British brand architecture options

What are the benefits of Scottish Independence?

At the most rational level, some studies have shown that voters will vote for what they do not want to lose, as much as what they hope to gain (7). Which is why spreading fear, uncertainty and also doubt is a strategy employed by both sides to ‘diss’ the other. 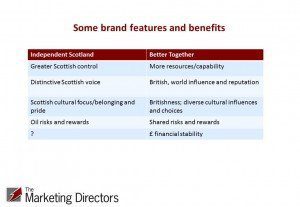 Features and benefits of Independent Scotland vs. Better Together

Our experience is that emotional arguments are more likely to hold sway. These are more deep-rooted than price/value arguments. For example, at the most simple level, Scottish independence gives Scotland greater control. Thus the challenge for the ’Yes’ campaign is to make this a meaningful benefit and convince the electorate that they can be relied on if granted ‘more’ control.

A distinctive Scottish voice or personality is another feature of independent Scotland. Though the challenge is to make this compelling. Historical evidence suggests ‘Scottishness’ is reasonably clear (Burns, bagpipes, whisky, golf, scenery etc.) though future ‘Scottishness’ is harder to comprehend.  The Saltire, for example, is more ubiquitous in Scotland, than the flag of St. George in England. It is possible that a distinctive Scottish voice could raise Scotland’s profile and status on the world stage. It could also raise self esteem. All are powerful emotional benefits. It is clear however, that a lot of effort has gone into defining Scotland the brand (8) and promoting Scottish iconography. Though one suspects the electorate are unaware of the underlying strategic nation branding effort.

Nevertheless, all things Scottish instill pride in being Scottish as much as the white rose, Yorkshire County Cricket Club, and Yorkshire Dales instill pride in Yorkshire folk. Pride is a powerful emotional benefit and is rooted in history as well as personal experiences. However, the key issue is whether voters prefer Scottishness over Britishness or the best of both.

The concept is ‘Britishness’ is harder to define. However, the Prime Minister recently attempted to do so (9), and the London 2012 opening ceremony illustrates some elements.

The latest opinion polls  give an up-to-date glimpse of expressed voting intentions (10).

1. Brand promotion is a precursor to brand recognition and engagement. So use multiple means, and all available relationships to promote your logo in places where it has positive and credible associations. 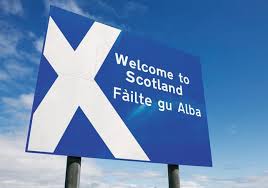 2. Abstract ideas are hard to understand yet alone agree with. So clearly articulate goals to tangibilise an idea and foster support.

3. Persuasion requires the winning of hearts and minds. Though different customer segments have different agendas. Some will be more cerebral, some more sophisticated, and some more emotional or cost driven. However by understanding the needs, and hot buttons of all, it is easier to devise messages and policies that both resonate and persuade. And also avoid alienating.

4. For brands competing in high risk and high reward markets, be ready for ever-increasing scrutiny and challenge.

5. And what’s our opinion? The man with the best plan may or may not win. So as emotional benefits will hold sway a brand strategy is essential. Therefore, in the run up to, during and beyond the Glasgow 2014 Commonwealth Games expect even more emotion!

Post election update; as the ‘nayes’ won, we’re delighted to retain our Scottish cousins …. though there are maneoverings for #indyref2 – return of the big beasts.